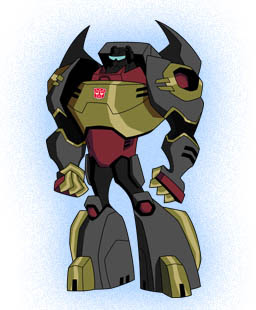 So apparently people are calling their babies names out of Twilight.  I will admit this make me sad.  It makes me think of the idea that babies could be affected but what their mothers saw late in pregnancy, like if she was scared by a spotted pony the baby would have spotted skin.
Biology doesn't work that way, but apparently psychology does.  Whatever you mother is impressed by just before your birth, that is the name you might get stuck with.

Bella, Cullen, Jasper, Alice and (oh my God) Emmett are sky-rocketing up the name popularity charts.  I suppose it could be worse.  It could be Renfield or Buffy.  Or if your mother was impressed by a Transformers story instead you could end up little baby Cliffjumper, Grimlock or Road Rebel instead.

Actually, if the choice was between Bella and Grimlock....
Posted by veinglory at 3:29 PM