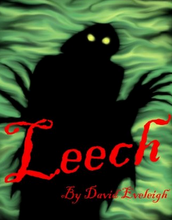 Playwright Jean Kerr once said “I'm tired of all this nonsense about beauty being only skin-deep. That's deep enough. What do you want - an adorable pancreas?”. But in the word of leech by David Eveleigh, vampire-like beings see, smell and hear humans inside and out—and so have very different notions of beauty. Thus reluctant paparazzi photographer “just pretty” Maria, becomes an unfortunate participant--and ultimately pawn--in a game of wits between a brave private investigator and an evil vampire king.

Leech is really a fairly straightforward horror/adventure story with a hero, hero’s girl, villain and minions and a small cast of secondary characters. It flirts with more adventurous themes such as what really makes one a parasite, but never gets very far into them. It toys with taking a new angle on vampires but uses them ultimately as a stock embodiment of evil. It strays somewhat into romance territory with the unusual decision to have Maria be the point of view character for much of the middle of the book, but its culmination of the story is the triumph of hero over villain not love over adversity.

Leech is a very readable vampire novel with hints of greater ambitions but, in my estimation, the different between good and great is the willingness to take at least one major risk. Any one of Leech’s more novel elements could have represented an exciting departure from tried and true tropes of the genre, if pursued just a little further.