IN THE DARK Rob Grahan 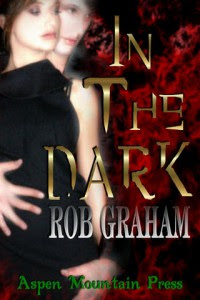 IN THE DARK is well written but it messed with my head. It has four distinct sections. In the first we meet the vampire hero Georges but learn almost nothing about him. Although it was neutrally written the villains as black men using drugs and sexual prowess to, um, wipe out the white race made me really, really uncomfortable. When this was followed by a section where the male vampire seduces himself a lesbian girlfriend and confronts a lesbian villain--and what subsequently happens to her--well....
The third part is about Georges and his girlfriend Diane being reunited in more ways than one is more comfortable reading. Georges finally became more of a rounded character with vulnerabilities and character. In the final part they journey back to Diane's home and both characters and the relationship become three dimensional and their world and lifestyle are fleshed out, just in time for the book to end.

Frankly this book didn't do much for me. I felt like maybe the writer developed and matured during the writing and if there was a sequel it would hit the ground running with two fully rounded characters as well as a supporting cast of secondary character with potential (but who didn't do very much in this story). I would say this story is worth a look but the four sections are mismatched in genre and quality and some of the content in the earlier parts is politically incorrect to say the least.

Note: this title is now out of print

Other Reviews of IN THE DARK
See also:

Posted by veinglory at 3:15 PM