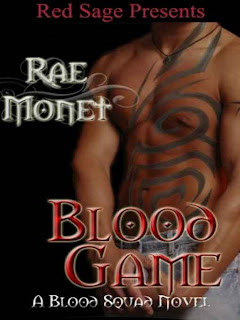 by Rae Monet is a vampire romance published by eRedSage. The core story is that vampire Byron is taken by the enemy (a rebel vampire clan). He hides from the torture in his own dream world until Sara Weston uses a device so she can meet him on the astroplane. After he recovers she goes into hiding, sure that a gorgeous vampire will not be interested in a wheelchair-bound woman. After being an evil vampire’s lab rat Byron has a few problems of his own.
'Blood Game' is a good length at around 40,000 words. The cover is a typical male torso but they digitally added tattoo isn’t even close to the one Byron is described as having. The writing is easy to read, the romance story moves along smoothly with two clearly drawn characters go through the usual throes of mutual misunderstanding before finding true love and multiple orgasms.
It may be because I did not read the first in the series but the setting, one-hundred years in the future seems superficial, sometimes painfully so. Vampires live underground, human up top, but nothing is said about how this is achieved.

Technology seems the same as now but unnecessarily renamed (Bluetooth is an autointerface, hypodermics are autoinjectors and traffic tickets are… autotickets—the future, apparently, is automatic). Add to this blasters, turbocycles, vidmovies and helocopters and the future also sounds decidedly retro. This might not have bothered me quite so much without the three page glossary, mainly covering words not used in the book, and in no way necessary unless you are the kind of reader who needs gems like “Organics=Vegetables grown without pesticides” and “Android=Mechanical android programmed in whatever capac¬ity they are needed.” And unfortunately I was equally irritated by the pseudo-science such as “massive irregular heart arrhythmia” and the idea that a vague sort of numb paralysis of the legs, and no other symptoms, could be caused by a virus entering the eye and destroying 60% of a person’s myelin.

But enough of that.
'Blood Game' is a professionally presented and serviceable paranormal romance with sex at the appropriate place in the relationship and two flawed people who truly seem to need each other. It is a competent book but not, for me, a keeper. To be fair I have a preference for science and disability being portrayed accurately and alphas that don’t go as far as stalking and throwing things around the room. Your mileage may vary. I feel this books is let down by plotting and world-building that is sketchy and, in places, implausible. In keeping with my general feeling of benign confusion the first book in this series is available not at eRedSage, but at Cerridwen Press.
1.5/5
Other Reviews:
See also:
Posted by veinglory at 6:39 PM