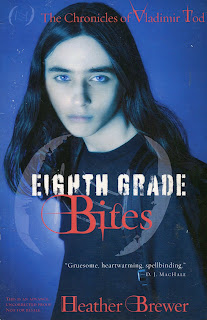 It is easy to review a book I like.

It is even fairly easy to review a book I didn't like for some set of overt reasons.

But I find it difficult to review a book, that through no really obvious fault, just never grabbed me. And that is why have been sitting on an advance review copy of Eighth Grade Bites

so long that the book has been long released (in August 2007), and any review I write now of negligible use to anyone. For which I can only apologise.

In the mean time this and two sequels have been released to great acclaim by customers. The book is, by any reasonable measure, a success. Reviews, on the other hand, were mixed.

For me the story of Vladimir Tod, orphaned son of a vampire and generally picked-upon thirteen year old, fell flat. He was just a stock kid with a good friend, a crush on a girl and trouble with bullies. The main character seemed to be a somewhat-superpowered bland everykid. The vampire lore had no real originality or interesting twist.

However your average picked-upon teen with a best friend, a crush on a girl, and trouble with bullies might well enjoy fantasising about having some super-powers and a mysterious past--and trouncing the evil villain. So I guess I would chalk this one down to just not being in the target audience.

p.s. FWIW I like the ARC cover (shown right) over the one used in wide release. But then, as I said, I am no maven of teen tastes.)

Nice to see an honest review.

It's surprisingly hard to find an impartial review of any book. I've bought a few duds on the basis of what has been said. I wonder if this and its follow-ups will have a renewed boost on the tail of the Twilight series.

Good review... and even if it did come out in 2007, I'm sure it will be helpful maybe during the shopping season for parents, etc. A book should grab you and never let go!

I feel really bad about sitting on the book this long.... :(

Doesn't sound like one I'll run out and get.

Thanks for filling us in.

Don't you hate having to finish a book you don't really like?