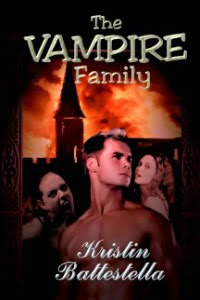 opens with 50 pages of rapid fire royal melodrama. The evil Antonio emerges from harsh poverty and by cunning and blithe murder takes a throne. An awful lot more than that happens, and lacking a pause to appreciate the impact of all this rape, murder, torture and betrayal--and lacking a sympathetic protagonist or a point-of-view character, I have to admit is passed as rather a blur with Antonio somehow both the hero and the villain of the piece.

Around page fifty the story leaps nine centuries into the future, but still lands thirty some years short of the present day. Surrounded by the female vampires created in the first part of the story (his family in more ways than one) Antonio now has plans for world domination. The time period bounces around rather a lot from there with an ongoing blur of action involving Antonio, his women and various secondary characters.

Somewhere in the middle of the murders, dungeons, zombies, torture and a cast of scores I realised I just could not get interested in this story. The Vampire Family has an authentic air of the old vampire tales like Varney the Vampire or even Dracula, but as a modern reader I find I want a character to root for, and some insight into his thoughts and feelings. And that is one thing this book doesn't have. Others may enjoy the convoluted family and their exciting lives, but this just wasn't my kind of book.