SANTA IS A VAMPIRE damian serbu 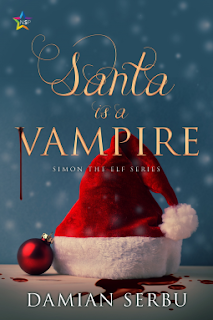 This story is basically a set of conversations that show how the whole Santa mythos is a front for a narcissistic murdering vampire.  It is borderline Bizarro genre which is going to limit the audience for it dramatically.  It is also packaged in a way that I think many readers will misunderstand, leaving them confronted with something much more offensive and less plot-driven than they were expecting—and while clever, completely without charm.

For strength of concept, and assuming the right audience, I am giving the story a good rating.  But I think it will attract many more reviews that are negative and disgusted, and not without reason.  A few blood spots on a “rom com”-esque cover is not enough to warn people about a fowl-mouthed shallow alcoholic protagonist and a story in which almost nothing happens but when it does it involves poop, private parts and child murder.

Enter at your own risk.

Posted by veinglory at 5:33 PM No comments:

ALL THE DOGS ARE DANCING j m goguen

ALL THE DOGS ARE DANCING is an absolute triumph in terms of world building.  The post-apocalyptic North America that Burner and Aaron traverse has texture, beauty, foreboding, strange perils, deep history, and layers that give it a strange plausibility despite being fill with roaming lions, bands of human cannibals, werewolf fight clubs, and terrifying deadwalkers.

Burner has a great deal of charm as a protagonist and the planned future alpha of his pack--which makes a peaceful subsistence living  migrating back and forth across the re-wilded countryside and staying away from the cities which are largely dystopian nightmares.

The plot, however… well.  It starts off as a risky rescue mission but quickly becomes a disorganized zigzag across the country punctuated by torture, explosions, more torture, and more explosions.  While Burner and Aaron instigate a few situations they spend the latter half of the story largely being rescued by more influential individuals.  The author makes use of some pretty huge coincidences, a couple of info-dumps, and the story eventually just peters out without anything in the way of an obvious conclusion.

This story is also very much a “with romantic elements” rather than a romance, but the charms of the main characters are undeniable and they do get a happily-ever-at-least-for-a-while. but it’s kind of a bittersweet one compared to the life Burner was living in chapter one. I found the entire book wildly original and entertaining but hope that in her future endeavors the author decides to focus more on blending these aspects with a plot that properly resolves by the end.

That said the vampires-by-another-name in the story are a truly novel take on the vampire idea in their origins, attributes, and philosophies. Goguen has mastered the art of not over-explaining how the supernatural-esque elements of the novel work, and they stand apart for the cliches that are now so common.  That alone makes me inclined to see what else this author may have written and look for opportunities to return to this dark world.


Review copy courtesy of Netgalley, 2/5
Posted by veinglory at 4:26 PM No comments:

VICTORIAN VAMPIRE has a lot of exciting supernatural and gothic elements, but nevertheless manages to be a fairly dull read. It is a full length novel but the prose is quite flat, the scenes disjointed, and the overall impression is of the story written once-through hastily with limited thought and research—but trying to hit a lot of popular tropes.

Our heroine Tabitha seems to spend very little time being a governess, let alone filling the role as would be expected in the Victorian era when your employer is a member of the nobility. In her various wanderings she manages to attract three suitors, one vanishes from the story without much explanation about why he was there in the first place, the other two are a sorcerer and a vampire. There is a disjointed story that involves Tabitha wandering down quite a few dark alleys and finding murderous monsters, and also repeatedly entertaining bachelor men unchaperoned. Anachronisms about.

If you aren’t worried about any kind of plausibility you might find this to be an entertaining read with the requisite romance happy ending. For me, I think I would have preferred it if Tabitha’s antics lead to a more realistic and unfortunate end and the vampire ended up with her employer, the lusty Lady Irene, instead.


Review copy courtesy of HiddenGems, 1/5, #Yawn
Posted by veinglory at 4:31 PM No comments:

Based on the blurb I expected THE VAMPIRE’S MASQUERADE to be a dual point-of-view story, when actually it is told entirely from Kasima.  The romance is quite straightforward and mainly impeded by the hero and heroine hesitating to express their level of commitment—which is understandable given the overall context of the story.  The author does a good job of filling in the world-building and introducing characters from the first book (which I have not read).

The vampire mythos itself is not especially interesting with standard romance vampires (a.k.a. hot vampire super-heroes with no real problems from their condition) but I did like the back-history of the civil war between humans and vampires after the vampire’s were outed. Honestly, I might have preferred a more gritty story from this time period rather than a largely cozy romance set in what seems like a very comfortable community doing well after the reconstruction. THE VAMPIRE’S MASQUERADE is not an overly complex story but emotionally gratifying and engaging throughout mainly due to Kasima’s likeability.

Posted by veinglory at 12:00 PM No comments:

MASKED LONGING is a vampire adventure-romance executed with professional polish.  The vampires are of the super-hero type with all the speed, strength, psychic ability and longevity advantages but really none of the disadvantages.   Estelle is assuming the duties as the most important vampire queen’s head of military/security.

This story is clearly part of a series and the author does a pretty good job of getting the reader up to speed, except for taking a very long time to explain that the masquerada, our hero Stephen being one, are equally long lived human-to-human shapeshifters.  Both heroine and hero have hundreds of years of baggage that is getting in the way of them getting together romantically, and there is also an inconvenient war going on.

Generally I am a huge fan of a romance where the female is more alpha than the male.  However at about the half way point of the book Estelle makes a horrendous decision that involves deserting her duties and gets a bunch of people she is responsible for killed—an outcome she has a passing one sentence of regret about.  Having no respect whatsoever for the heroine meant that the sudden resolution of the previously crippling emotional barriers to love, in the last few pages of the book, didn’t really have the impact it was probably meant to.

A review copy was provided courtesy of Netgalley, 2/5
Posted by veinglory at 2:14 PM No comments: 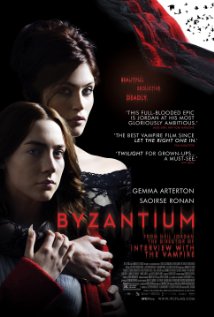 Another vampire movie to appear recently on Netflix is BYZANTIUM.  In theory this film should be bowed down by he weight of its tired old tropes of first love, coming of age, mother/daughter strife and braided present-and-past storylines.  Yet somehow the quality of the screenplay and acting, and downbeat but atmospheric look of the movie carry it through.

It may help that vampirism gives both the length of time and the stakes to make melodramatic behavior of the leads believable motivations.  Mother vampire seeks a quiet life of transient prostitution to conceal her daughter from an ancient threat she has never fully explained to the girls. Daughter seeks a more refined and respectable lifestyle and yearns to tell someone, perhaps her new quasi-boyfriend, the truth about who she really is.

Both backstory and current conflict come to a crux on a dark pier, where both heroines will be either destroyed or transformed.